Children are scared by TV news

Children are scared by TV news that shows violence, shootings, terrorist attacks, wars, disasters and plane crashes – or even show dead or hurt children. There is rarely anything positive. Such news distresses adults. For children it is even more so. 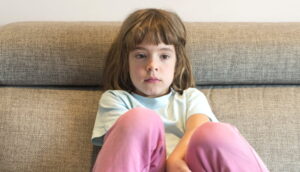 Long after the TV’s turned off; these images play in children’s minds. They lack the skill to process these images; they cannot distance themselves from them. Children fear that such things could happen to them or their family. Their safe, loving environment and innocence is ruptured. Some may start to think that the world is only a dangerous place full of bad people.

Children are scared by TV news – age determines how they react

Younger children up to five to six years old are rarely affected. For them, all news is irrelevant, not entertaining nor fun to watch. They also have short attention spans.

Older children from six to 10 or so are most vulnerable. They know the difference between fantasy and reality but may interpret the news as personal – that the distressed child in the news could be them.

Teenagers, being more media savvy, know that images are used to increase program ratings.  Nevertheless, they too get disturbed by adverse news. Here, knowledge is power. Discuss issues with your teenager and furthermore, encourage them to research the subject and only then to put together their informed opinions.  Click here to read more